In news that will surprise absolutely no sane person, the corrupt senile war criminal and so called “president” of the Imperialist States of Amerikastan, Joe Biden Bidet, has decided to reverse Donald Twitterführer Trump’s so-called plans, or promises, or half articulated thoughts about withdrawing from Afghanistan and illegally occupied East Syria. The “rationale” for this is that Amerikastan must stay there to “fight ISIS”. Obviously, if Amerikastan has to fight ISIS, there have to be ISIS to fight, and – by a total coincidence, I’m sure – ISIS is suddenly swarming over areas where they had been extirpated from by the Syrian army years ago, and bombing Kabul as well. Absolute and total coincidence, I tell you!

Meanwhile the Bidet regime is also making moves to declare al Qaeda in Syria (which nowadays calls itself Hayyat Tahrir al Sham) not a “terrorist” organisation. This would hardly be a surprise, since it’s already declared al Qaeda affiliate the Turkistan Islamic Party (of Uighur jihadi headchoppers) not terrorists.

As such, both ISIS and al Qaeda must be overflowing with gratitude to Bidet, and since it wouldn’t exactly be decorous for them to send him a Valentine, I did it for them.

(Apologies for the recent lack of writing and cartoons. I have had health problems, and I actually drew this with a strapped up right wrist. I hope Bidet is grateful, or at least “wins” the Nobel Peace Prize. Why not?)

“America is back, ready to lead the world.”

New story arc next, I was thoroughly sick of this one and glad to be able to finally bring it to a conclusion.

Or you can call him Juan Guaido II, if you prefer, but then he’d probably cut your head off.

Seriously, Amerikastanis still think themselves entitled to lecture the world on freedom and democracy?

Here’s a version without dialogue, if you would like to add your own:

With any luck, the two Amerikastani tribes will now launch Civil War II on each other. Won’t that be fun?!?

Raghead and Towelhead are back!

Reaction from anyone who’s been reading this strip only after 2015: “Who the hell are Raghead and Towelhead?”

Raghead and Towelhead were the first two characters on this strip, who virtually monopolised it during the early days. I was far from comfortable drawing faces back then, which is why their faces are never shown. Over time they fell into disuse, supplanted by Jihadi Colin and Jihadi Rose, but they never quite went away. I was always thinking that at some point I would bring them back again, and with the war in Nagorno Karabakh, I thought, why ever not?

Those who do remember these two will note that while I kept their basic character designs, I have changed their kaffiyehs, from checked for Raghead and banded for Towelhead, to plain colours. The reason is simple: I’m lazy. That’s also why I reverted to black and white after many years, because I simply don’t have the energy to sit up for hours colouring. And as far as the appearance goes, I tried out the grainy look that was until 2015 standard for almost all cartoons I did (for those who are interested, it’s Woodcut on Corel Paint), but it was simply not what I wanted to do anymore. So, though I stuck to my intention of black and white, I chose the “clean” look (it’s Distress on Corel Paint), and then put in a few shades of grey. I hope you like it.

But assuming they don’t, Raghead and Towelhead will definitely feature again on this site. Bigly!

But then you had another Negro out in the field. The house Negro was in the minority. The masses–the field Negroes were the masses. They were in the majority. When the master got sick, they prayed that he’d die. [Laughter] If his house caught on fire, they’d pray for a wind to come along and fan the breeze.

If someone came to the house Negro and said, “Let’s go, let’s separate,” naturally that Uncle Tom would say, “Go where? What could I do without boss? Where would I live? How would I dress? Who would look out for me?” That’s the house Negro. But if you went to the field Negro and said, “Let’s go, let’s separate,” he wouldn’t even ask you where or how. He’d say, “Yes, let’s go.” And that one ended right there.

So now you have a twentieth-century-type of house Negro. A twentieth-century Uncle Tom. He’s just as much an Uncle Tom today as Uncle Tom was 100 and 200 years ago. Only he’s a modern Uncle Tom. That Uncle Tom wore a handkerchief around his head. This Uncle Tom wears a top hat. He’s sharp. He dresses just like you do. He speaks the same phraseology, the same language. He tries to speak it better than you do. He speaks with the same accents, same diction. And when you say, “your army,” he says, “our army.” He hasn’t got anybody to defend him, but anytime you say “we” he says “we.” “Our president,” “our government,” “our Senate,” “our congressmen,” “our this and our that.” And he hasn’t even got a seat in that “our” even at the end of the line. So this is the twentieth-century Negro. Whenever you say “you,” the personal pronoun in the singular or in the plural, he uses it right along with you. When you say you’re in trouble, he says, “Yes, we’re in trouble.”

Growing up as a child of the Cold War, in the 1970s, I was always taught that American blacks – oppressed by the white ruling class – were our natural allies against the Amerikastani Empire. I was so inculcated in this concept that even a black athlete would immediately command my support against a white athlete, no matter where the latter was from. It wasn’t racism. It was solidarity. Muhammad Ali was a revered hero. Malcolm X, whose autobiography I read in my twenties, is still someone whose shadow I am not worthy to walk on.

So where are those American blacks today? Where are those brave men and women who stood against the system? What kind of person mass votes for house negroes like the blood soaked war criminal Barack Hussein Obama, or for the megalomaniacal mass murderer Killary Clinton, who called blacks “super predators”, locked them up en masse, looted Haiti, and destroyed Libya so that blacks are sold as slaves there?

I no longer have any greater sympathy or understanding of such people than I have of any other Amerikastani. They’re not black Amerikastanis, they’re just Amerikastanis. As ignorant, bigoted, stupid and brainwashed as any other.

That is what today’s cartoon is about.

“Did you imagine I was just along as eye candy or something?” – Jihadi Rose.

I’d been wanting to do a strip about the postwar experiences of Amerikastani war criminals for a while. I have zero sympathy for them. 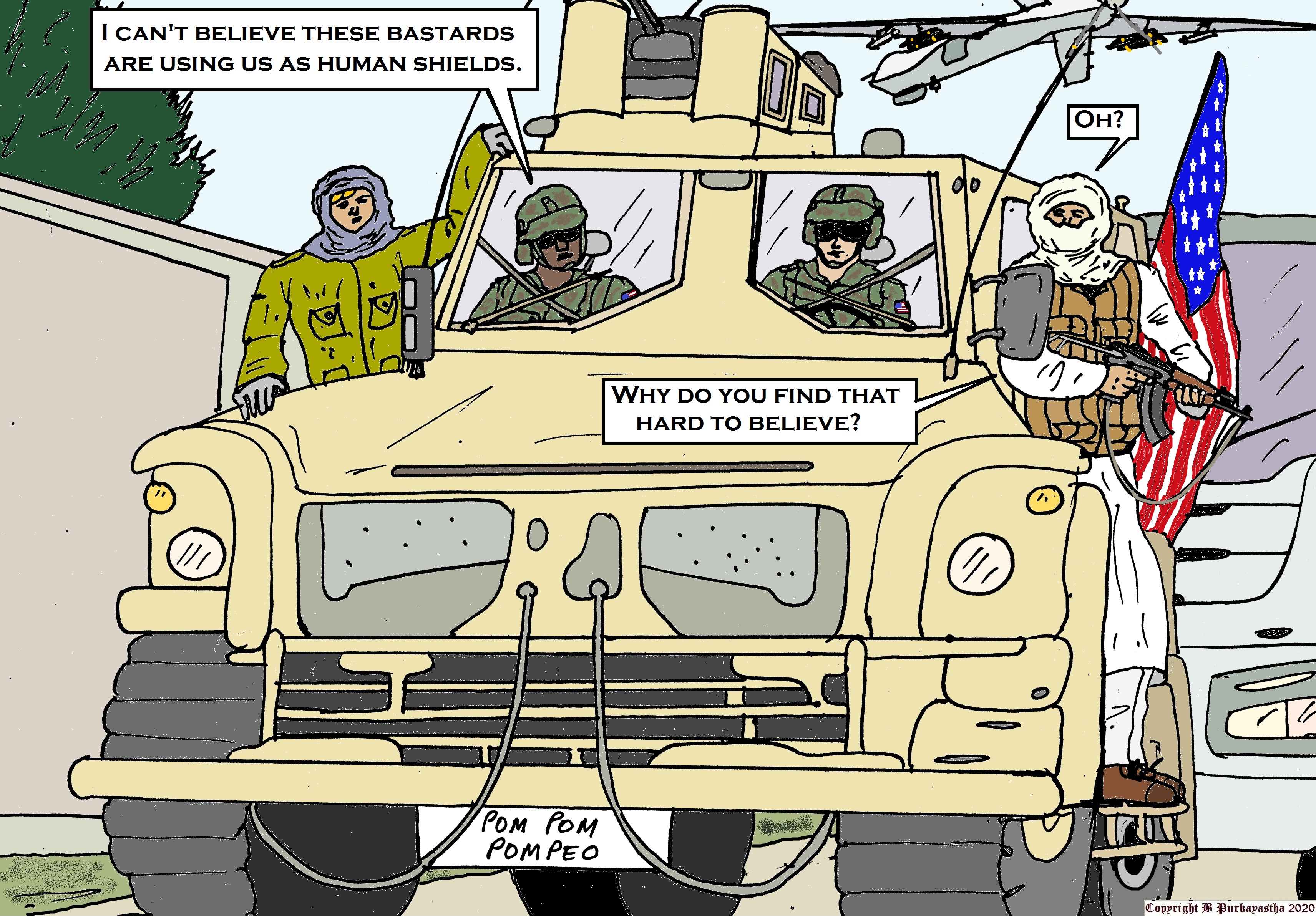 – George W Bush, Amerikastani war criminal and now liberal hero, friend of Ellen DeGenerate, who invaded Iraq on a lie, totally destroying religious freedom there, and who through his stint in power supported such scum as the Saudi Barbarian headchopper regime, Saparmurat Niyazov of Turkmenistan, and Paul Kagame of Rwanda, under whom there was and is no freedom of anything at all.